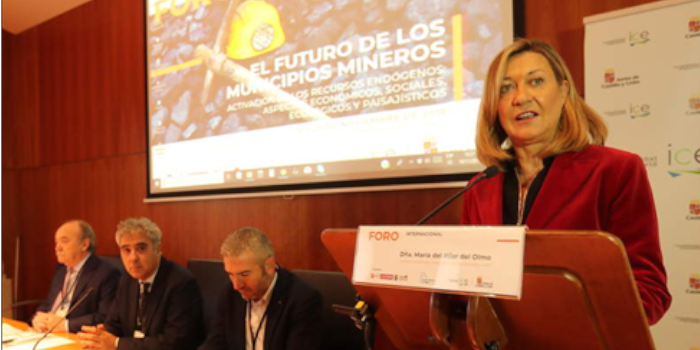 Members of the ESMIMET project consortium, specifically representatives of SIEMCALSA and the Directorate General of Energy and Mines of the Junta de Castilla y León, have attended the conference “The future of mining municipalities” held at the House of Cultures of Bembibre (León) between November 19-20.

The Spanish Minister of Economy and Finance, Pilar del Olmo, opened the day highlighting the need for the “Plan for the Economic Revitalization of the Mining Municipalities 2016-2020” promoted by the Junta de Castilla y León.

In this sense, we are working on the ESMIMET project, which favors the development of regional, joint activities and projects and initiatives of high added value in different R&D&I subjects for the study of the mining potential of Castilla y León and Portugal.

Del Olmo has highlighted the need to involve the different actors of the territory in the search for economic alternatives for the mining municipalities of León and Palencia, promoting employment and sustainable entrepreneurship.