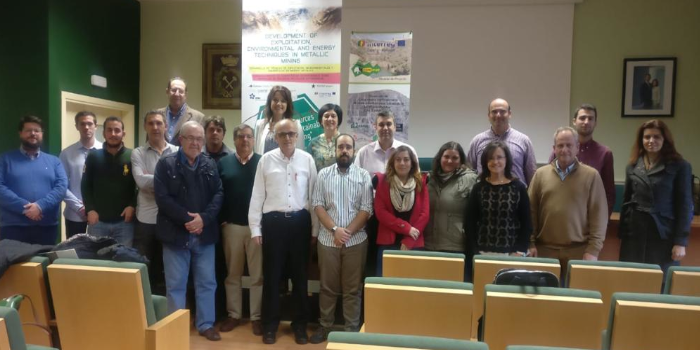 ESMIMET consortium meets at the Higher Technical School of Mining Engineers (ESTIM) of the University of León to celebrate the third periodic meeting, since it was launches in July 2017.

Representatives of the University of León, University of Porto (FCUP), SIEMCALSA, the Pedro Nunes Institute (IPN), the Directorate General of Energies and Mines (DGEM) and CARTIF, as coordinator, shared the main achievements and tasks carried out until now, or even in progress. These tasks are the inventory of existing mineralizations, the geological integration in GIS (Geographic Information System), the map of variants and the in situ characterization of the known deposits, sampling of the deposits, etc. The physical-chemical, mineralogical and metallogenetic studies carried out until now were also presented.

The consortium also presented the results of some of the characterization studies of rock geochemistry, extracted from the deposits of the areas in which the project is being developed.

On the other hand, the CARTIF researchers working on the project presented a presentation with the pending work and presented the work done in terms of dissemination. In addition, they reported that the private network of companies planned by the project to promote the exchange of experiences and knowledge, already has more than 20 companies in the sector.

To finalize the meeting, the representatives of all the members of the consortium agreed on the next actions and the expected dates for their completion